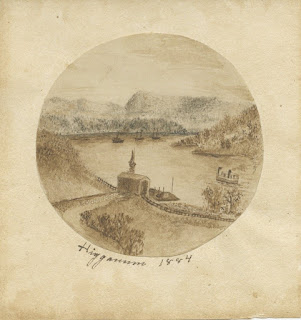 This small drawing, titled “Higganum 1884,” shows the railroad bridge crossing the Higganum River at Higganum Cove. The view is looking north towards Middletown, Portland, and East Hampton.  Just to the right of the bridge is the Higganum Cove Wharf along the Connecticut River. The river features four sailing ships and a steam boat. The drawing was purchased by the Society after a successful fundraising campaign in 2006. The artist is unknown.

The Connecticut Valley Railroad was organized in 1868 and headed by James C. Walkley of Haddam. The line ran 45 miles between the shoreline in Old Saybrook and Hartford. On July 31, 1871 the first passenger train operated along the completed track to much fanfare and celebration. Haddam had five train stations at one point in time, including Higganum, Walkley, Haddam, Arnold’s Station and Goodspeed/East Haddam.

The first bridge at Higganum Cove was a covered wooden bridge, built in 1871. The structure was covered to protect the oak wooden frame of the bridge. According to train historian Max Miller, wooden bridges were popular in the early years of the railroad, but by 1900 trains were heavier and larger, and the wooden bridges could not support them. In 1903 the wooden covered bridge was replaced with a steel bridge.