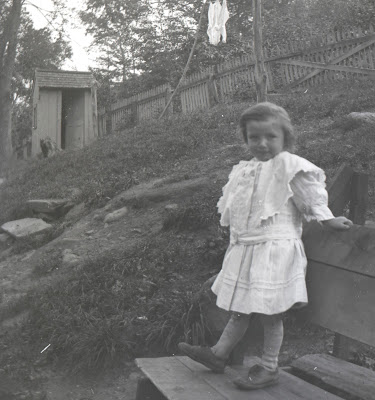 The Backhouse, Pokey, Loo, Depository, Necessary and Johnnie are all names given to the small building located to the rear of many historic houses commonly known in these parts as the Outhouse or Privy. Early American Colonists called the building a privy, after the Latin privus or private place. Privies were generally freestanding buildings located at the rear or far corner of the dooryard. Location was determined by its location to water supplies and exposure to public view. It was also important to keep in mind how far a small child or elderly resident could travel especially in an emergency.

By the end of the 18th century some wealthy families when enlarging their homes would relocate the privy indoors to a distant corner of a newly constructed ell. However, in conservative Haddam, the outhouse remained a separate building.

In Connecticut, most privies were constructed of wood, the most abundant building material in the north, although down south they were commonly erected of stone or brick. Ventilation was kept to a minimum to keep out the cold and snow. Windows were added to allow in sunlight and could range from simple square multi-light sash to elaborate stained glass.

Most early homes only had one privy for all family members but schools would have separate boys and girls outhouse. Vents were later used to identify gender use. The crescent moon shape, the ancient universal symbol for womanhood, was used for the ladies privy and the sun or star was commonly used to identify the men’s.

Privies were generally constructed over an excavation between 3 and 6 feet deep. The privy pit could be lined with wood, stone or bottomless barrels. Rather than having to clean the pit, many homeowners opted for the moving the privy to a new location and filling in the hole.

Most residential privies had two holes, but larger families were known to have six openings. Children were accommodated with small openings, lower seats and steps.

The privy at the Thankful Arnold House Museum has four seats including one child’s. The building features hinged wooden covers and simple six sash window for ventilation. The interior walls are plain unlike other area outhouses which feature plastered interiors and wallpaper. This spring we are repurposing the privy from our garden shed back to its original use. Although it will not be used, visitors can visit and experience what a trip to the necessary meant in 1825.

In 2017 the Haddam Historical Society hosted a Outhouse Tour. Below are the "loo's" which were featured on the tour.

The privy at the John Brainerd House is one of the most unusual privies on the tour. The large outbuilding features two sections- an animal shed on the left and a four-seat loo on the right. The privy section is fully plastered and accessed by interior steps. There are two adult seats and two child seats. The building was built on a slight incline and features a basement level in the rear. Below the privy portion there is an opening featuring large granite slabs where a sled or sledge was located to collect waste. When full the sled was dragged away and its contents deposited. Like many New England outhouses a lilac tree is located nearby, some say to mask the smell, but more likely to mask the building. 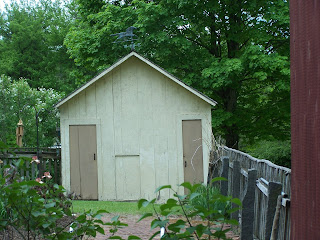 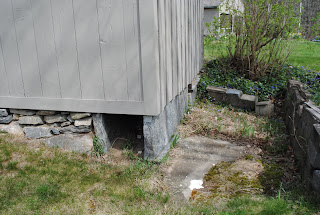 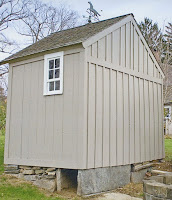 The outhouse to the rear of the Ezra Kelsey House is a typical 19th century privy in terms of its design, construction and materials.  Set a distance from the house, the privy was probably moved in the early 20th century. Currently the building sits on a brick foundation and features 2 adult seats and one child seat which is a common configuration in Haddam. The property was in the Kelsey family from 1815 to 1964 when the current owner purchased the property. Indoor plumbing was installed in the house when electricity came to Higganum in the 1920s. 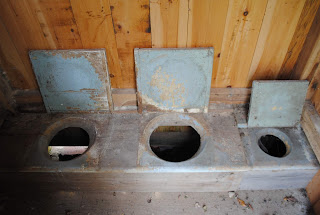 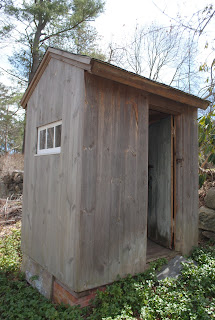 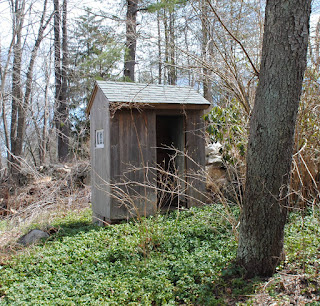 
Levi (1771-1861) and Mehitabel (Hand, 1772-1855) Ward were an ambitious couple. Levi, Yale College class of 1790, was a protégé of James Hillhouse, longtime Yale treasurer and U.S. Senator for Connecticut. Mehitabel was of the prominent Hand family for whom Madison's high school is named. The privy reflects their social assertiveness as much as the house. Equipped with three holes, two windows (a luxury when glass was expensive) and a vaulted plaster ceiling, it asserts itself to be not just a "necessary" but architecture. The current owners have carefully restored the building and won a Haddam Historical Society historic preservation award in 2004. 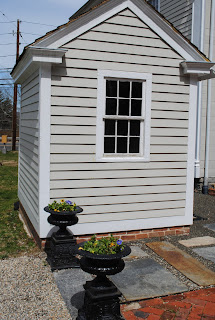 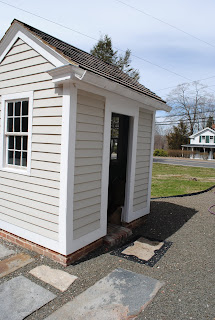 This “old” outhouse is a new addition to the historic Sears House. The wood frame three-seater was once located at the Heman Brainerd Homestead along Saybrook Road and moved to this property in 2016. The well-preserved structure features an arched four-paned window similar to those found at the former Higganum Hotel. The interior of the loo features the typical three seat configuration of two adult and one child, as well as painted vertical panels. Other outbuildings on the property include a garden shed, sugar shack and chicken coop. A rescued historic barn, also from the Brainerd Homestead, will soon be reassembled near the privy. 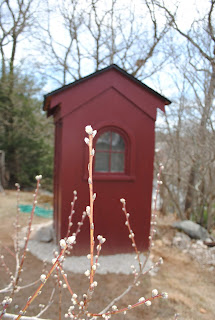 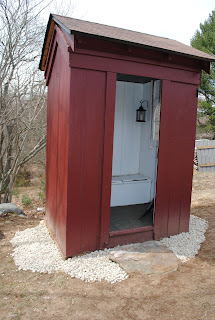 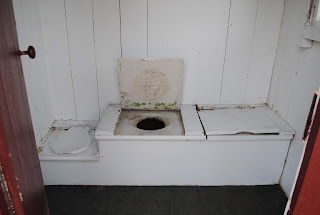 The Merwin family owned this property between 1840 and 1976 and were skilled carpenters by trade. After indoor plumbing was installed during the 1930s, the building was used as a tool shed.
Special characteristics of this privy's construction are interior plaster walls and trim with key locking door and an opening window typical of house construction. It had rear removable trays to extract waste much like a military latrine and a special three size hole toilet seat feature. This could accommodate a size range of a small child up to a large adult. 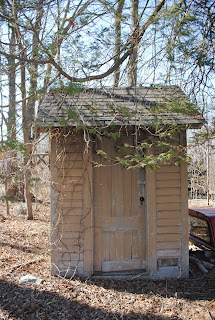 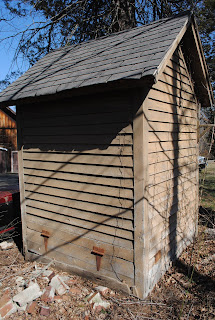 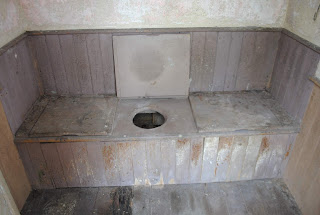 This highly stylized privy is unique because of its square shape and hip roof. The delightful interior features wall- papered walls with wainscotting, painted checkered floor and the platform for a three seater, including a child seat. Unlike many of the other privies, this building features two, double-hung, 4 X 4 sash on opposite walls to provide cross ventilation. The exterior is also refined exhibiting clapboarded siding and a paneled entry door. The ornate Second Empire house was built circa1873 by Nathan Fuller, a cotton manufacturer and merchant. He came to Higganum from Rhode Island after the death of his first wife.  He and his second wife, Jane, had five children while living in this home. 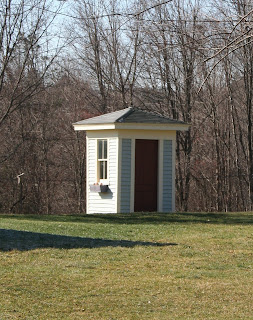 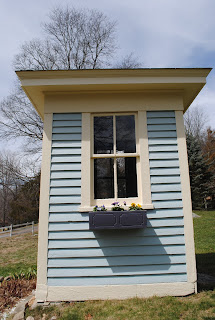 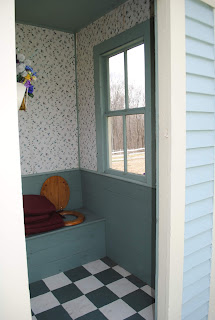 The Arnold House outhouse is a typical New England privy construction with wood frame, clapboard exterior and gable roof. The interior features four seats- three for adults and one child-sized opening. Early privies were generally located at the rear of the dooryard, far away from the water supply but close enough to the house so a small child or elderly parent could get there quickly. The house was in the possession of the Arnold family for four generations until 1962. Indoor plumbing came to Haddam in the early 1920s. 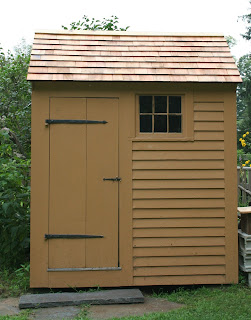 Our good friend and exceptional story-teller, Jack Calhoun spent the day traveling from privy to privy to read the newspaper and catch up on local events!


29 Spencer Road
Increase Brainerd House
The dwelling at 29 Spencer Road is a most unusual structure composed of an early 1755 half house, a relocated 1720 gambrel and a 1925 brick addition. The brick outhouse (now a garden shed) dates from 1925 and was built by Italian immigrant Damiano Monica. 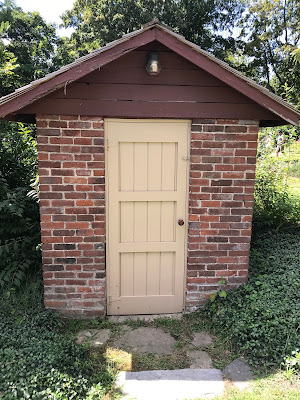 1230 Saybrook Road
The Fisk Shailer House
The privy was here in 1970 when I arrived and I'm guessing the previous owner (Anton Sindelar) a plumber, acquired the outhouse from the Shailerville School house owner (Julia Butler) and moved it to 1230 when the school was converted to a residence in 1940.  In the 80's my kids and the neighbor kids used it as their clubhouse. There are suggestive carvings on the interior walls as well as numerous dated initials. I have replaced the sill, floor, and roof and currently use it as storage. --Chuck Tomaszewski. Owner 2020. 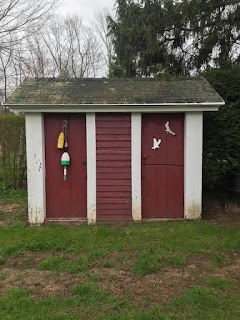 Posted by Haddam Neck Fair History at 10:05 AM